Remember the adorable kitty who usually sits patiently on her perch when it’s dinnertime?

While I was away for Christmas, Lilo decided that was silly. The first night I was back, she jumped onto the counter as soon as I started to put her dinner together, nudging my hand and trying to stick her face in the can.

Well, that’s not an easy way to feed a cat. And an 8-pound mammal trying to snatch your ingredients away while you’re baking – not so good either.

I could have resorted to a spray bottle, but feline behaviorists say that only works to keep cats off the counter when you’re around. When you’re not around, they know there’s no one who can spray them with water, and up on the counter they go.

It was clearly time to re-train Lilo to stay off the counter. We’ve gone through this a couple times before. After a concentrated training period, the effects last for a long time until I do something stupid, like get into an established habit of leaving dirty dishes on the counter. Then, she takes on the responsibility of re-training me not to do that, which she does by jumping on the counter to lick the dirty dishes and occasionally knock them to the floor in her excitement.

I’m not sure what got her back into jumping on the counter while I was gone, but the wonderful person who took care of her says not to blame him. So I will assign it to the mysteries of Lilo’s brain.

I got out a couple rolls of clear Con-Tact paper I’d picked up from the Dollar Tree, as well as scraps of other colors I had lying around. (For those that aren’t familiar with it, Con-Tact paper isn’t actually paper. It’s a plastic sheet with an adhesive backing used for lining shelves, books and the like.) Then I laid it out sticky side up on the counters and kitchen table.

Like most cats, Lilo hates the feeling of Con-Tact paper against her paws and will avoid the counters when it’s there – or when she thinks it’s there. I leave it up for a week or two until she’s gotten into the habit of thinking, “I hate the counters, they’re sticky.” When I need to use the counter, I just lift up the sheet and stick it to the side of the cabinet until I’m done, then put it back. With the kitchen table, sometimes I can’t be bothered when I’m just having a quick bite, so I leave the Con-Tact paper in place and put a placemat down on top of it, then remove it when I’m done. The adhesive in the Con-Tact paper is pretty weak and doesn’t damage the placemat.

I put Con-Tact paper on my stove, too, because Lilo jumped on it to try to grab some food when I was cooking. I switched to white because I was out of clear – and white matches the stovetop, anyway.

When you’re telling cats where not to hang out, it’s also good to tell them where they can hang out and to reward them when they do. Otherwise, they’ll go back to their old behavior as soon as the have the opportunity – or perhaps develop a new undesirable behavior, like hanging out on the kitchen table instead of the counter.

For cats, a big part of the attraction to counters is that they can get a good view of the room from there. Imagine you’re a cat: It’s a lot easier to see what’s going on by looking down than by having to crane your neck backward from a spot on the floor. And given that cats are both predators and prey in the wild, they naturally want to see what’s going on at all times –or, when it’s time to sleep, to be somewhere it’s hard for predators to reach.

That’s why the top of a cabinet is a good spot for a nap.

Lilo already has a cat tree in the kitchen that she uses often, but given her appropriation of the counters, she must not consider it adequate for viewing the territory.

So the second part of the solution is to expand her territory. I’ve got no problem with her hanging out on top of the refrigerator and cabinets – heck, I’m not doing anything up there – but she hasn’t really claimed them as her own, going up there only for the occasional visit.

She can get to the fridge from the cat tree, and to the cabinets from the fridge. I decided to make the top of the fridge more inviting by moving my radio off of it and adding a piece of carpet. What cat doesn’t love carpet?

(If you don’t have a cat tree in your kitchen, you can create a non-countertop cat route to the fridge by installing open shelving or setting a chair or step ladder nearby. Here are some different types of wall shelves specifically designed for cats.

I have a stack of small carpet squares that I picked up for cheap at my local Habitat ReStore and keep around for cat-related projects. I picked out a green one because it goes with my kitchen colors. 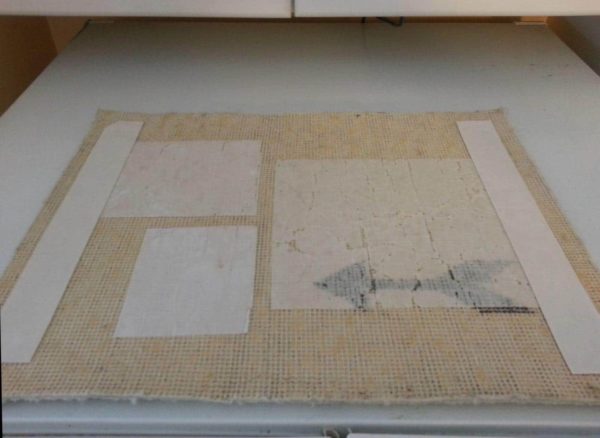 I’d like to add carpet pieces to the tops of the cabinets as well, but haven’t gotten around to it yet.

It’s been about a week and things are going well. For the first couple days, Lilo would jump on the counter anyway – perhaps hoping that the Con-Tact paper had been removed – and then immediately jump off in horror upon discovering that it had not. By now, she has given up for the most part. Whenever I catch her looking longingly up there, I remind her about the fridge by tapping on it or rubbing a little catnip into the rug, and she immediately goes up there.

Sometimes she even takes a catnap.