Sorry about the silence over the last week, but it’s Hippie Christmas here in Madison and I’ve been a tad busy with the festivities. For the uninitiated, Hippie Christmas happens every mid-August around the University of Wisconsin–Madison campus. That’s when most of the student rental contracts turn over, and kids who didn’t have the time or foresight to empty their apartments ahead of time dump their unwanted belongings on the curb for the garbage collectors—or whoever gets there first.

If you need a coffee maker, a vacuum cleaner, or furniture, this is the time of year to look. Dekalb and I found four Keurig machines and countless regular coffee makers. And, as in previous years, we found lots of coffee, too. People throw out unopened bags because they don’t want to walk the few blocks to the food pantry donation site (charities pop up with temporary donation sites all over downtown in mid-August) or because it didn’t occur to them. I added about 10 pounds to my freezer last weekend, and that doesn’t include the K-cups and instant coffee that I put in my kitchen pantry.

The lens on my camera is cracked, so I didn’t get any good pictures as far as the actual hunting went, but here’s one of my finds: 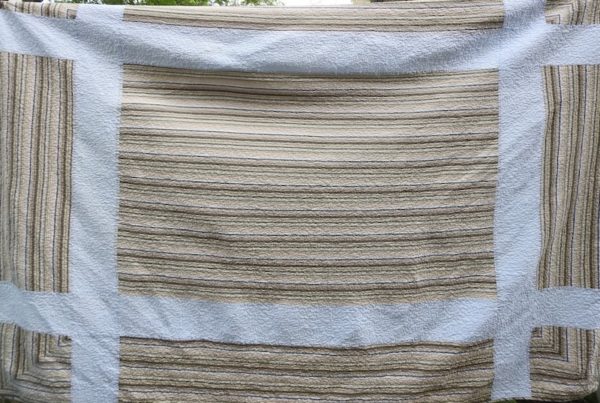 It’s a department store quilt, not one of a kind, but it’s still beautiful, and whoever got paid 50¢/hour to make it deserves their work to end up somewhere nicer than the county landfill.

It was a little dingy when we found it. Not stained with gross human stuff, but rather looking like it had been used to wrap a bookshelf for moving and then dragged over half a mile of dry clay. I gave it a hot wash with plenty of OxyClean, and it came out as good as new.