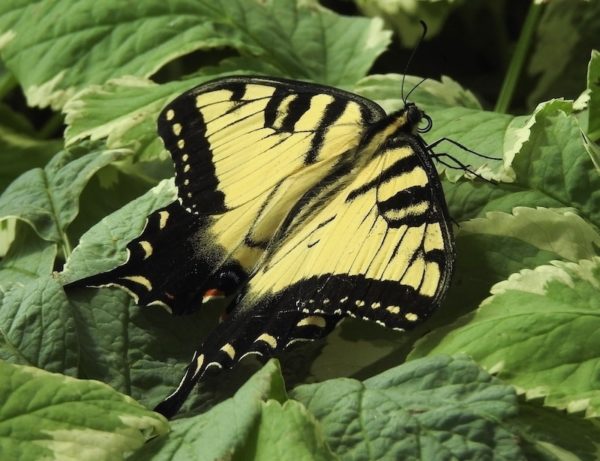 I stepped out onto my back deck today to flip over a tarp I’d hosed off over the weekend, and lo and behold, what do I see a few yard away but a bit of yellow flittering about midair?

Was it a goldfinch, or an oriole, or a paper airplane? No! It was an Eastern tiger swallowtail, and my first of the season!

I watched it alight on some blooming phlox, then dashed inside to grab my camera.

Ah. It landed just a few feet from the phlox plant, on an overgrown patch of bishop’s weed. (Wait, that was redundant. Bishop’s weed is always overgrown.)

I took a closer look.The lack of blue chevrons along the black border of the lower wing (also called the hindwing) meant it was male. Not that it really matters. It was pretty either way.

Also, is it just me, or does it look like someone jotted down a W smack in the middle of this butterfly? 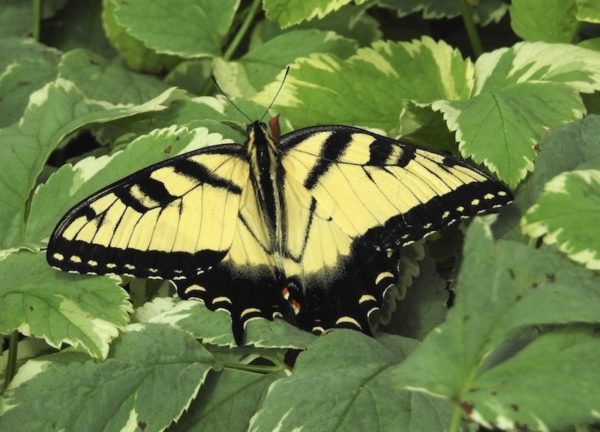 Actually, lots of Eastern tiger swallowtails have this W on their wings. Which reminds me …

A detour into the genetics of sex determination

You may have heard that some insects have a sex-determination system that involves W- and Z-chromosomes, as opposed to the X- and Y- chromosomes that help determine sex in humans and most other mammals. Papilio glaucus have the ZW system, and the W on the wings  is a good way to remember this.

Second, here’s the actual reason they are called Z and W chromosomes:

One hundred and twenty-six years ago—or maybe it was one hundred and twenty-seven—in a city called Leipzig, a scientist named Hermann Henking was studying cells under a microscope. In these cells, he noted one chromosome that behaved differently than the other chromosomes. He wasn’t sure it even was a chromosome. And because it was so mysterious, he called it “the X element.”

A decade or so later, Nettie Stevens, a student at Bryn Mawr College, was doing experiments in her lab. She figured out that the X element was indeed a chromosome and that it, along with another, smaller chromosome, helped determine sex in mealworms. She called this smaller chromosome Y because, hey, Y comes after X, so why not?

Further research revealed animals who reproduce sexually but don’t have XY chromosomes. These animals have different chromosomes that help determine their sex. Scientists took the letters of the alphabet closest to X and Y, and voila! The ZW nomenclature was born.

I haven’t even started on the X0 and Z0 systems …

And all this time, you probably thought X and Y were called that because they kinda sorta look like Y and Y under a microscope, except when they don’t. … Wait? You didn’t? Am I the only one? (Even more confusing: The Z chromosome looks like a capital X, and the W chromosome looks a lot like a lowercase one. Go figure.)

Wikipedia is actually a good place to learn a bit about the color morphs. Then check out the Butterflies and Moths website to test yourself on your identification skills with photo after photo of Eastern tiger swallowtails. 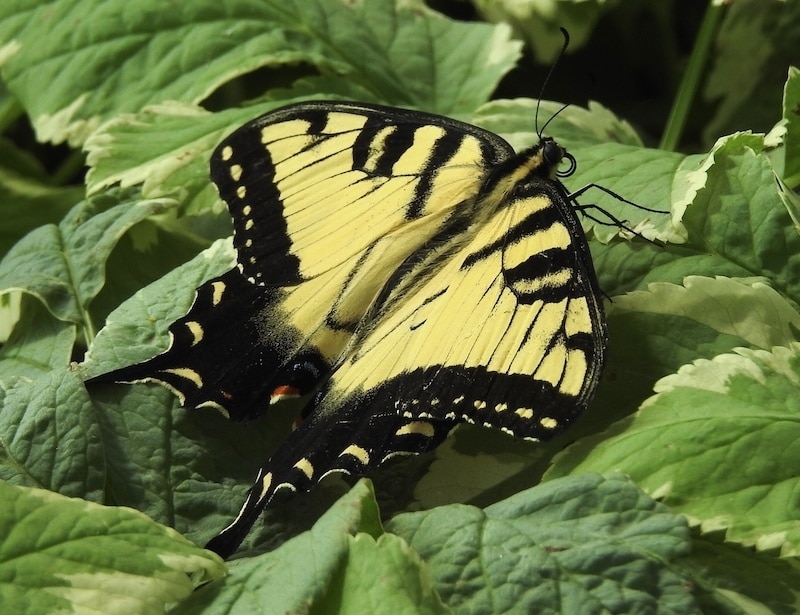